For photos taken on, or in the immediate vicinity of Clapham Common, London, SW4

Clapham Common is a roughly triangular area of grassland of about 200 acres in size, situated between Clapham, Battersea and Balham in south London. Although most of it lies in Wandsworth it is managed by Lambeth. It has 3 ponds and a paddling pool. The Anglican Holy Trinity Church (1776) is at the northern end of the common. Also on the common is the Clapham bandstand, the largest in the UK. This has just been restored, and was originally erected 1890.

The common is surrounded by many fine houses which began to be built in the 1700s. Clapham was then a fashionable village south of London, home to many wealthy bankers and merchants. Later in the 18th century a group of residents known as the Clapham Sect became active in the Abolitionist movement.

As London expanded in the 19th century Clapham was eventually absorbed into the capital.

Famous literary figures who lived on or near the common at various stages in their careers include Samuel Pepys, Graham Greene, Noel Coward and Natsume Soseki. Lytton Strachey was born on the south side of the common and Thomas Babbington Macaulay spent his childhood in Clapham. The composer Edvard Grieg lived for a while on Clapham Common North Side, as did the architect of the Palace of Westminster, Sir Charles Barry. The actor Jeremy Brett lived on Clapham Common North Side for many years before his death in 1995.

Today the common is as diverse as it is vast. Two hundred and twenty acres of greenery teem with dog walkers, kite flyers, joggers, cyclists, skateboarders and children. It is one of the most popular spaces in South London, famed for its music festivals and outdoor events in the summer. Every winter, the common hosts one of Lambeth’s premier firework displays on Guy Fawkes night.

After a day soaking up the sun in Clapham you can retire to the string of stylish bars and restaurants that line the common and Clapham High Street.

London flickr groups
A comprehensive directory of London groups can be found at
Pimp my London Group. 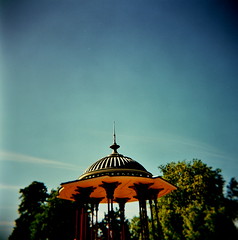