The Glocal Project: An Experiment in Mass Collaboration

The Glocal Project: An Experiment in Mass Collaboration

Brief: Simply set a scene and photograph it. Perform and pose alone or with friends to create a narrative captured by the camera. You can stage every detail and gesture, or be creative and leave some elements to spontaneity. You can create a single image or create a storyboard with images in sequence. See some examples below for inspiration. Go forth and experiment and then share your results with us!

Instructions: Tag your photo with “glocalproject” and “photochallenge9″ and add it to our flickr pool. Need help? Email us .

Lights! Camera! Action! That's the sentiment behind this fun photo challenge. We've been busy in the techlab building a new website and creating new software tools, such as a diptych maker and an image breeder, so we wanted to create something that was fun and informative, allowing our participants to manipulate their subject at will.

Visual storytelling is as old as drawings on cave walls. The invention of the camera brought about an obviously easy way to depict scenes from folklore, literature, drama, personal and religious stories. When this is done using the camera it is called "staged photography" and its roots are as old as photography itself. In nineteenth century photography, staged scenes reflected that photography as an art form was very closely aligned with theatre. Henry Peach Robinson's Fading Away is a perfect example of figures arrayed as if frozen in place on a horizontal line across a shallow stage.

This photo does little to challenge our notions of perspective and framing (modernist concepts which would come some time later), but it encourages us to look at theatre as a reference point for interpreting the stylistic elements of the photograph as mentioned above. Like many plays of this era, influenced by gothic themes of death and decay, staged scenes like the one above were popular photographic goods. To represent a scene like the above through photography reflects one of the early uses of the camera -- creating small, easy to reproduce, transportable pictures that reflect cultural symbols.

We are most familiar with staged photography because of its uses in advertising and marketing ploys. By the 1950's staged fictional scenes were widely used in advertising, situating the product or service advertised into a story. Paul Outerbridge's The Coffee Drinkers (1939) features a group of men enjoying one another's company over coffee. Quite the opposite of pop-art, this photography doesn't feature the coffee's packaging as the central subject, but instead provides us with a story that appeals to personal experience. You probably recognize the sentiment from various different advertisements that you've seen.

A 1951 example by Ruth Orkin, shows the possibility of not completely staging every detail and gesture of the scene. You'll likely recognize American Girl in Italy 1951 which is a partial mise en scene that created some unexpected outcomes. As the story goes, Ruth Orkin intended to sell a photograph to a magazine for an article on women travelling alone. She asked the young girl, who was staying in her hotel, if she would like to be photographed walking down the street. The group of males standing near a corner of the Piazza della Repubblica were not intentionally supposed to tease the young girl, so the end result was actually a much more powerful image than originally intended. For this photo challenge we hope some of you will apply these principles of spontaneity and leave a few details to chance.

Staged photography is perhaps an artform that in the past received less attention in galleries simply because of its relationship to advertising, however, it has indeed been actively used by artists throughout the 20th century. We wanted to include an example of contemporary staged photography so that our participants could get a sense of different value systems that have critiqued this form. From the latter half of the 20th century until now, staged photography is situated within the social context of cinematography and television. Our contemporary experiences are constantly reflected in digital images and much of what we know about our social setting is brought to us through films, videos and television. One way for artists to photograph this social context is through re-enactment. Unlike historical re-enactments, in contemporary staged photography, all pretense of association with the real world is dropped.

One very simple example of this abandonment of "reality" is Tina Barney's Sheila and Moya (1987), which combines the drama of soap operas with the more private terrain of family photographs. This photo masquerades as a snapshot of real life, although it is known that Barney did adopt a more directorial role, including the use of a lighting assistant to capture the seemingly spontaneous interactions of her close friends and family.

One of the interesting points about this artists work is that it evokes the voyeurism of reality tv, which is also a form that blurs the line between real and representation. So, where theatre used to inform the construction of staged pictures in early photography, artists like Barney can look to genres in film and television to find other realities for representation. Do you think it matters whether the people in this photo are actors or family members, posed or not?

We hope the examples above were helpful in inspiring your creativity. Be sure to share the results of your experimentation with us on our flickr group. Any questions? Just email us.
admin
drosen7900 13 years ago
Here is an bit of a silly example to start off the photochallenge:

"a bad day at the office" 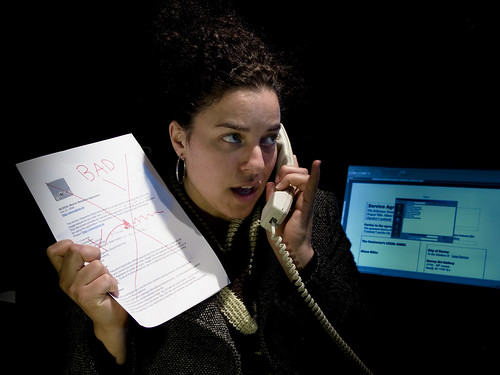 admin
some_images! 13 years ago
This is so creepy. Thanks for submitting it to the challenge.
I'm really impressed.
admin
Ericalokichicken 13 years ago
This was my clone project for my photo class, my friend actually took the pictures, I just photoshopped them. I'm defiantly better at photoshop than I was in the summer. :P