Please read the "About Hawai'i Flickr Meetup" section below for group guidelines before posting photos to the group pool or joining in on any discussions. Mahalo!

A tropical journey in Hawaii nei, meeting up with other Flickr peoples, talking story and telling the story...island style.

Purpose of meetups: To get away from work and hang out with the cool folks. We are a bunch of great people who like to have a good time . . . with our cameras. :o)

Definition of Hawaiʻi Flickr meetup: Any gathering that takes place somewhere in Hawaiʻi that was announced here. (Therefore, if the you have pictures of an event that wasn't announced here, don't post them here.)

Respectful Shooting
1. Don't shoot children, except when permission is granted to you by their guardian(s).
2. If someone is wearing a red shirt, don't shoot him/her.
2a. If you come to a Flickr meetup and prefer not to be photographed, wear a red shirt.
3. If you post a picture of an adult and he/she asks you to remove that photo, edit the photo so he/she is no longer identifiable in it, or remove it.

Respectful Conversation
1. Be polite. Remember, we're nice people here!
2. No profanity allowed in online discussion groups. Hawaiʻi Flickr meetups are often a family affair, and discussion of them should be G-rated, as well.

RSVPs: Organizers are nice people doing a job so that everybody can have a good time. Do what you can to make that job easier by registering with Upcoming; if you have a Yahoo! ID (which you do; it's the same as your Flickr ID), you're already halfway there!

Official movie poster of our first ever Flickr Meetup on March 11, 2006: 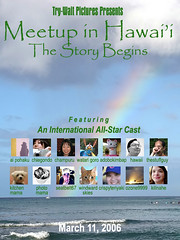