And yep, Natalie. They gots poutine :)
.Allan 15 years ago
...convenient for all you Ryersonians and GBCers.
Gene Wilburn 15 years ago
Sounds great. I'll try to be there.

They have food at the library? When Mrs bytepusher worked in the neighbourhood her whole department went every Friday for "lunch", which meant stopping at Raffles for food and eating it upstairs at the Library washing it down with their lovely malted beverages.
David.S.L 15 years ago
damn i've got exams!!!!
poised hospital [deleted] 15 years ago
Pardon the dumb question... it's my first time out. What's the expectation... do people show up with gear and go shooting, or do they come with shots to compare and talk? I'm really excited to be getting together with likeminded folks.

Cheers!
kingofthenerds 15 years ago
Some people bring prints to show or swap, most of us bring cameras, especially if you have something unusual (last time it was 110 SLRs but we've seen all kinds of stuff right back to a 1930's press camera) but the only mandatory is come prepared to socialize and chat.
.natalie 15 years ago
I'm in if they've gots poutine. :)

Will there be a print swap this time?
.Allan Posted 15 years ago. Edited by .Allan (member) 15 years ago
Mais, oui, Natalie - poutine. There's pub food too - here's a couple of descriptions /reviews:

toronto.ibegin.com/barsclubs/imperial-public-library
grahamkracker 15 years ago
Poutine! I'm there!!!!
Bizzy Girl 15 years ago
How ironic I'm finally free on Thursdays and it's not on a Thursday this time!

Methinks I can actually make this one! Woot!!!
sams_toronto 15 years ago
ey im in
写真家 / 摄影师 15 years ago
big hand for the mods!
admin
Steph Cloutier 15 years ago
@ .Natalie: the poutine is delicious there!

I'll be eating some after I finish class that night.
chelseagirl Posted 15 years ago. Edited by chelseagirl (member) 15 years ago
yaaaaaaaaay! i am in, too. What a thrill!

... and I've always wondered what it looks like inside that bar.
Sylvain Dumais 15 years ago
I'll be there too.
First time after I just moved here.
Brian Labelle 15 years ago
From Allan's descriptions/review link it says students "combine drinking and thinking." I'd like to try that. I'm in.
admin
Burlap Jacket 15 years ago
I got no class. So I'll be there.

Al: I assume upstairs?
.Allan Posted 15 years ago. Edited by .Allan (member) 15 years ago
Yup - up :-)
dzgnboy 15 years ago
Downstairs gets a little scary sometimes.
Mark J Harvey 15 years ago
i want to come but i want to shoot..
Bizzy Girl 15 years ago
*wonders what the bathrooms are like*

Hehehe
fancy lip [deleted] 15 years ago
I think I can,,, I think I can
dzgnboy 15 years ago
The bathrooms are extra-stinky there. Dunno if I can stomach a repeat shoot, especially with today's queasy stomach.

Mr Bokeh: Lots to shoot around the hood, both outside and inside.
hc916 15 years ago
Will try my best to come out, but January if busy for work!
Bill Smith1 15 years ago
Lu,

I am on Victoria St in the "Old Business" Building (can't remember the street number for the life of me. Depends when they let you out of class:)
Lú_ 15 years ago
It's called "VIC". Okay, I'm sure it has a longer name. I'm up on the 5th floor, though, and have to get rid of my students, so you may well beat me around the corner.
admin
Steph Cloutier 15 years ago
Yeah, no one wants to drink downstairs though I have and it has it's 'charming' atmosphere. There's a huge aquarium in the middle of the round bar though.
tracer.ca 15 years ago
Can't commit to this, but would like to go.
Mawz 15 years ago
I'll be there.
admin
spDuchamp 15 years ago
in
jeffb477 15 years ago
I will try to drop in, but it is my curling night. It will depend if I have the early or late start time.
Somewhere In Toronto 15 years ago
I'll try to get there for 7pm, but I work out in Meadowvale now so could be a bit late!
andy66 15 years ago
I'm going to be there.
ithinkx 15 years ago
I don't move to Toronto until 25th but I'll come to the next one after that! :)
Jim Dawson Photography 15 years ago
Allan ... I'll do my best to attend ....
spinlab 15 years ago
Awesome ... poutine ...
see you all on the 23rd!
-stacey- 15 years ago
I'm in...my first Toronto flickr meet (be kind)!
spotmaticfanatic 15 years ago
I'll ante up. I haven't been to the Library snce my student days. Okay, that was only last April, but whatever! See you all there!
brainy curtain [deleted] 15 years ago
poutine...I like the places where they serve Russian president! Will be there.
andy66 15 years ago
jenya:

could U please get this word out for us re: Steve Banks* 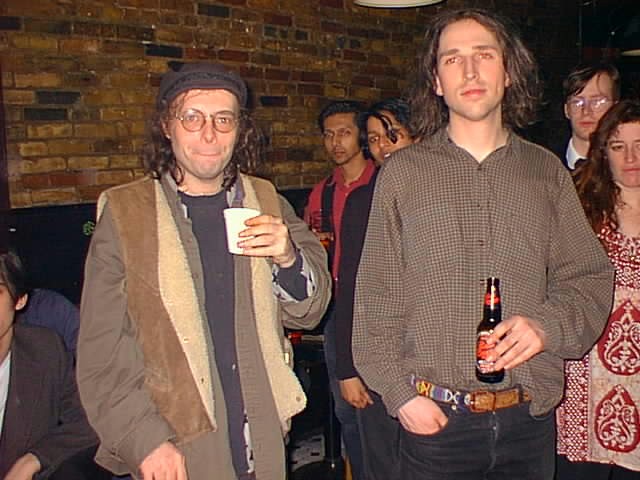 January 25 is coming; the first anniversary of the passing of Steve Banks. And to reacquaint ourselves with his creative and personal greatness, we must never forget the site: www.stevebanks.net/
He was an inspirational cornerstone of Toronto's musical and cultural underground, and his reverberations are still felt; he touched us dearly, he touched many dearly.

An anniversary event is in the works. It will raise funds for a proper, permanent physical memorial to Steve Banks.

A location in Trinity-Bellwoods Park, a space beloved by Steve, has already been chosen for a tree and plaque in his honour. Once that is in place--hopefully, in the springtime on Steve's birthday, March 14, his ashes (presently in Erich Boehm's possession) shall be scattered at Trinity-Bellwoods. Screaming Sam has been commissioned to create the plaque which will be unveiled at the memorial.


The headline act shall be : Trans Love Airways (which first reunited for the memorial show at the Drake last March 13). It had originally been hoped to have other "headline" bands, such as A Neon Rome, in the lineup; but that proved impractical and, in the end, given the complications of setup, rehearsal, etc (familiar to those involved in the Drake show) it is just as well--and perhaps symbolically most appropriate--that TLA, under Steve's presiding spirit, carry the headline weight on its own.

And it allows the memorial to be more than just a "club show". Steve being Steve, he would have frowned upon it becoming too formal an affair, whatever the quality of the individual acts. More appropriate is the loose and open-ended ambience of love and happiness and bliss we associate with he who is being commemorated.
Whatever the venue shall be, it should have, or be coaxed into, an informality, a little art-schooly, a little crash-paddy, a little trippy, high and low and full of life and energy--think of couches, pillows, art objects and found objects all over. Think back to the places he lived, the places he played, everything from the Beverley to 84 Nassau; and summon up the spirit, summon up the bliss.

TLA will be the headliners, the musical focus point; yet good friends, special guests and an overall jamming atmosphere will be encouraged, so that it will scarcely matter if there's one act or several (including solo performances). Expect surprises.

Yet it won't be just about the music. Readings, performance pieces, artworks, testimonials and memories are to be part of the proceedings as well. All of this will contribute to the memorial fund; Kimi has already offered a number of Steve's own "mono-delic" prints as well as t-shirts--if anyone else has anything else to offer, please bring it forward.

Right now, planning is in very preliminary stages. If anyone wants to offer advice--or offer themselves in some capacity--please come forward ASAP; if necessary, an organizing committee and/or meeting can be set up. But remember: the date is January 25, and the planning and booking has to start early...

i've got an extra 5 rolls of outdated TMax100 (works fine) that I'd like to trade for faster B&W film (XP2 or BW400/400CN) would do me fine as well...
*p. 15 years ago
I 'm in...I should be able to make it !
Shreyans Bhansali 15 years ago
I always say I'll come and genuinely want to, but somehow never make it.
This time I MEAN IT: I'm coming.
andyscamera 15 years ago
I meant it too, but it's starting to look less probable. Work is inconvenient.
pensive volcano 15 years ago
I'll try to come by. It'll be my first flickr meet --- please reassure me that there will be no "hello my name is" stickers in sight? :)
fancy lip [deleted] 15 years ago
Hello... my name is Markus... welcome..lol.. sticker attached to my forehead,,, apply directly to the forehead,, apply directly to the forehead....
.Allan 15 years ago
No stickers, this time ;-)
dzgnboy 15 years ago
I'll bring the branding irons.
pensive volcano 15 years ago
(I always suspected you were a little evil, dzgnboy...must've been that toe shot. ;)
broken fold [deleted] 15 years ago
I'm 50/50. Just got back from vacation, so I have no idea yet what my work load will be yet. Hope to be there.
admin
Steph Cloutier Posted 15 years ago. Edited by Steph Cloutier (admin) 15 years ago
@ rebootyourcomputer: newbies are welcome! Just be ready to be photographed and flashed. With flashes, not, er... nevermind!
:)
Rick Loftus 15 years ago
I guess I'd better come armed with my own flash ;)
kingofthenerds 15 years ago
Oh puhleese, people leave the flashes at home!!! this means you, what's the matter cantcha read?
dzgnboy 15 years ago
But it's fun to watch the epileptics drop one-by-one...
ettml 15 years ago
i will try to make it, it'll be my first one
Bizzy Girl 15 years ago
Pffftttt I've gone from a definitely to a maybe. I really wanna show off my new lenses, tho....
chelseagirl 15 years ago
NO STICKERS?!