Hello; My name is Sally Rae Kimmel. Welcome to my Flickr Profile Page.

Please also visit me at:

I live in and am a life-long resident of the East Bay Area, a sub-region of the San Francisco Bay Area in Northern California. I have always been interested in photography, but didn't pursue it until I got a DSLR camera in March of 2011. Since then photography has become a passion for me. Being outdoors in nature is my favorite place to be, so most of the photos in my photostream are related to nature in some way and have been taken locally here in the San Francisco Bay Area. Being able to try to capture the beautiful places and wildlife around me with my camera to share with others brings so much joy to my life, so I enjoy seeing my photos published (if you're interested in seeing some of my published work, I've included links below) and turning them into prints (framed, canvas and metal), greeting cards and other photo gifts (such as mugs, magnets, key chains, ornaments, throw pillows, photo blankets, tote bags, t-shirts, etc.!)

Viewing and using my photos:

Please contact me if you would like to use any of my photographs. All of my photographs are copyright protected. They are not to be used in any way, in whole or in part , copied, reproduced, downloaded, distributed and/or used in any form of media, publication or print including on the internet without my express written permission. This applies to all of my photos, whether or not this notice appears in the description, and whether or not there is a copyright or watermark on the photo itself.

If you'd like to reach me, you can send an email to: sallyraek@yahoo.com

If you got to this page from a web address that took you here to my profile page and not to the one that takes you directly to my photostream and would like to view my photos here on Flickr, just click on "Photostream" under my name "Sally Rae Kimmel" above. You can also click on "Albums" above, but please note that the majority of my photos are not in albums as I'd like them to be. (My photostream needs to be organized! )

To get back to this page from my "Photostream", you click on the "More" down arrow on the top right and then click on "Profile".

Here are some of my favorite photos that I've taken that you can view in the meantime just in case you don't want to deal with my disorganization. =)

(If you click on any of them, it will take you to a larger version of it on my photostream):

If you'd like to see more of my personal favorites, you can click on the photo below and it will take you to my "Favorites" album:

My photos that appear here on Flickr can also be viewed on other websites such as Fluidr and Flickriver:

Links to my Magazine Covers shown below: 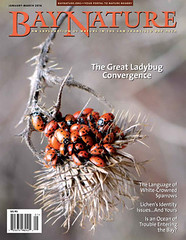 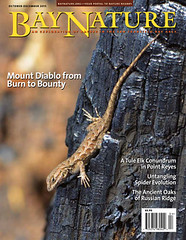 (Photos of the magazine covers shown above courtesy of Bay Nature Institute).

The majority of my published photos have appeared in "Bay Nature", a quarterly magazine published by Bay Nature Institute located in Berkeley, California whom I take photos for on spec and on assignment. I've had 61 photos (including 2 Covers and 1 Opening Shot) accompanying 25 articles (23 in the print magazine issues and web versions of those articles, and 2 online-only articles) in 16 issues. The first 2 photos out of the 61 were published in their April - June 2012 issue. (A list of the issues that my photos have appeared in and the articles that my photos have accompanied can be found below along with links to the online versions of the print magazine issues and the web versions of the articles.)

List of articles, (and Links to), my published photos appearing in Bay Nature magazine and on their website:

To view the online versions of the printed issues of the magazines listed below, go to:

July-September 2013 issue: 2 photos (p. 13 bottom right) with 1 article: Into The Forest, Finding Your Way To Butano By Marilyn Fahey (no web version of this article available)

Links to the web versions of the articles listed above that appeared in the magazine and also to online-only articles that my photos accompanied:

My acorn photo is in the print magazine, but not shown online in this web version of the article below: 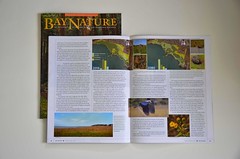 The above photo shows an April-June 2012 issue of Bay Nature magazine on top of another issue of the same date opened to show my photos on the bottom of page 44 (upland habitat landscape shot of Breuner Marsh) and on the bottom left (Great Blue Heron in flight) on page 45, which were my first two photos that were published in the magazine.

The issues of Bay Nature magazine that my photos appeared on the covers of are the October-December 2015 and the January-March 2016 issues (also pictured larger above) and my photos and the covers of the magazine are shown side-by-side in the photo collages below : 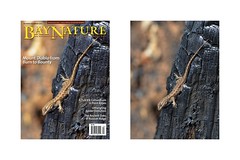 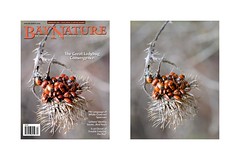 (Photos of the magazine covers used in my photo collages above courtesy of Bay Nature Institute).

Besides my overwintering ladybugs photos appearing on the cover of the January-March 2016 issue of Bay Nature magazine and accompanying the article on the inside of that issue, I've also had 2 of them published on pages 46 and 47 of the book titled "Wonderments Of The East Bay" By Sylvia Linsteadt and Malcolm Margolin published in 2014 by Heyday Books located in Berkeley, California: 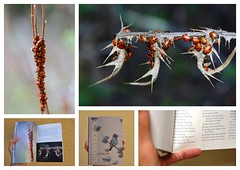 In addition to 2 magazine covers, I've also had one of my photos appear on the cover of a phone book for the Valley Yellow Pages 2013-14 Contra Costa County East Directory: 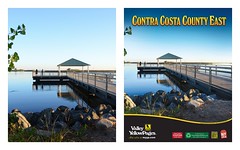 (Photo of the phone book cover used in my photo collage above courtesy of the graphic designer, Johna Vasquez).

My photos have also been used on the front and back covers, and tab dividers, of the 2014 CAFR and 2015-16 Budget Books for Contra Costa County:

(You can click on any of the photos above to see a larger version of them).

I also had a photo on the cover of a park brochure for the East Bay Regional Park District (a photo of Fern Cottage at Kennedy Grove Regional Recreation Area) which can be seen by following the link below:

A photo that I took at Diablo Foods in Lafayette, California appeared on page B7 of the Lamorinda Weekly newspaper published on Wednesday, September 25, 2013:

My first published photo was of a western pond turtle which was the photo for the month of August in the East Bay Regional Park District's 2012 Calendar. They also used it on the brochure that they included inside the calendar and in their ads which appeared in numerous issues of Bay Nature magazine: 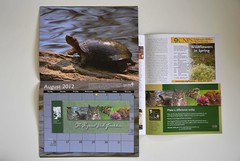 One of my overwintering ladybugs photos was also displayed on a Media Display Table in a special exhibit in 2014 at the Natural History Museum in Kassel Germany (I was not able to see the exhibit in person, so Carolin Wellmann from the museum took photos of the display for me and emailed them to me). 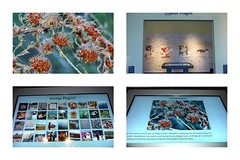 My photos have also appeared in the East Bay Regional Park District's Regional In Nature Activity Guides (page 6 Nov.- Dec. 2012; pages 4 and 6 Jan.- Feb. 2013 and on page 10 May-June 2016) that are mailed out to the members of the Regional Parks Foundation and distributed to local newspaper customers; in their Compass magazines (Fall/Winter 2013; Winter 2014-15) that are sent out to the members; in an employee manual for their Big Break Regional Shoreline park and for a permanent display in the Visitor Center there; in a fact sheet for the park district (www.ebparks.org/Assets/_Nav_Categories/About_Us/2015+EBRP...) and in additional publications not listed here and on their websites. Plus my photos have appeared in publications for other agencies and also online.

To visit again, my Flickr profile and photostream web address links are:

Also if you don't type the "http" or "www" and just type the following into your address bar or a search engine such as google, you should be able to find me here as well.

Life is short. Pursue your dreams. =) 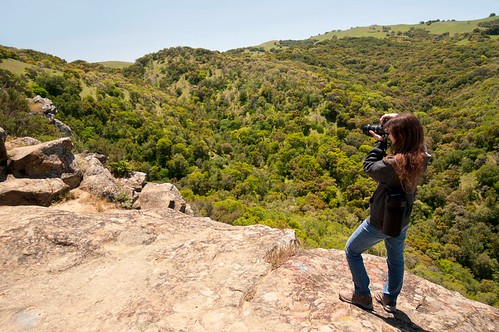 It's a special treat when some of my favorite photo subjects land on me! =) 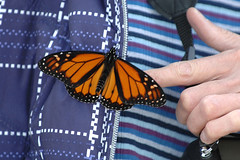 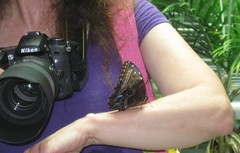 Photo Credits for the photos taken of me appearing on this page:

Profile photo of me at the top of this page: Melissa McCrossen

Photo of me above at Morgan Territory Regional Preserve: Angela Noblett Photography

Photo above on the left of the Monarch butterfly that landed on me: Charles Shen

Photo above on the right of the Blue Morph butterfly that landed on my arm: Scott McGehee

Have something nice to say about Sally Rae Kimmel? Write a testimonial